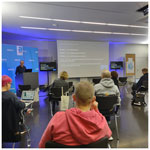 The “On melting ground. Arctic Archaeology” conference took place in Chemnitz, Germany, from 20 to 22 October 2021. The smac (Staatliches Museum für Archäologie Chemnitz) arranged the international conference in cooperation with the Eurasia Department of the German Archaeological Institute (DAI) to help prepare for the special exhibition “On Thin Ice” (working title), which is planned to open in autumn 2023 in Chemnitz. The conference was hybrid, allowing people to participate in person or from home. The language was English or Russian, made possible with excellent simultaneous translation. A few of the presentations will be summarised in this conference review. To gain a complete overview of the conference, please follow the link to smac's web page, where you can find the abstracts of all the presentations: https://www.smac.sachsen.de/fortbildungen-Info_Arktische_Archaeologie_Tagung.html (last access: 20 December 2022).

The relevance of the planned exhibition is not only to raise awareness of climate change, of how visible the consequences are in the Arctic, and of the fact that much cultural heritage will be lost unless people start to act. The exhibition also aims to “represent the cultural diversity, resilience and resourcefulness of Arctic people and to illustrate the unique cultural heritage threatened by climate change” (smac archive, 2021).

The idea behind the conference was, therefore, to bring many researchers specialising in the Arctic together to learn from them and share ideas and also present the current state of archaeological research in the Arctic for the first time in Germany.

The expected exhibition concept is to present a small range of objects that tell stories on the following seven topics: (1) life in the Arctic; (2) navigating the ice – mobility; (3) economic patterns and survival strategies – hunters, herders, fishers; (4) myths and stories – spiritual life; (5) inhabiting the cold; dwellings, settlements, domestic life; (6) art and crafts'; and (7) the myth of the Arctic Circle – expeditions into the ice, colonisation, and missionary work. For the organisers of the exhibition to get an overview of the current archaeological research on these topics, the conference was divided into the following five sections: (1) “The myth of the Arctic Circle: expeditions into the ice, colonization, missionary work”; (2) “Exploring the natural environment, the climate and its changes”; (3a) “Outline of cultural history: Cultures in the ice”; (3b) “Arctic Culture Heritage Management”; (4) “Current archaeological excavations of the last 15 years”; and (5) “The Arctic in Museum Collections”. Another aim is to introduce the public of central Europe to the ethnographic and archaeological objects and recent excavations from the Arctic area – content that is deemed not to be well known among this audience.

This review will consider the quality of the contributions based on the aim of the conference of preparing for the exhibition; a selection of presentations will be reviewed, points from the discussions will be considered, and, finally, some thoughts will be given on how the hybrid format worked out.

Conferences on the Arctic are no rarity. Climate change, social development, adaptation, sustainability, food security, geopolitics – all are well-known topics from such conferences. What made the “On melting ground. Arctic Archaeology” conference stand out is the focus on the archaeological material and its role in helping prepare for the exhibition. This was visible in the broadness of the subjects covered in presentations and how the question of ways to improve played a minor role compared to how best to represent the Arctic. Compared to conferences with a more specialised focus, many presentations consisted of dense but cursory expositions. For a student who is relatively new to Arctic archaeology, like this author, this was a fun insight into Arctic archaeology's diversity. What is interesting to note about these cursory expositions is that although they fitted within the session topics and did provide the conference organisers with useful information, they did not try to convert their material into an output more easily adaptable for an exhibition. However, two presenters stood out in their focus on creating an accessible narrative and are worth mentioning here.

Liliana Janik addressed the topic of environments through the visual narratives of rock art. Based on examples from Alta, Norway, and the White Sea, Russia, this talk provided insights into the world around the artists and how they considered their changing surroundings.

Frigga Kruse similarly presented the narrative of life and rapid changes at Advent City, a coal-mining settlement in Svalbard, based on what could be told from particular findings from the site. This example was used to show how archaeological findings can be re-told using words often associated with climate studies like “transformation”, “resilience”, and “adaptation” which might help shed light on how archaeology can contribute to the climate debate.

Thirty-three talks were presented in 3 days. Here is a sample of the talks.

Otto Habeck and Sari Stark both examined the complex interactions between humans, their herds, and the environment to understand long-term ecosystem changes to better project influences of climate change. Sari Stark presented the slow recovery of the tundra landscape after being grazed by reindeer herds primarily due to soil composition changes. Otto Habeck looked into the dynamics between pastoralism and permafrost. Referring to the conference title, this talk pointed out that many processes influence ecosystem and socio-economic changes and melting ground is just one of them.

Five presentations introduced the extraordinarily rich and well-preserved material found in Russian excavations, such as Ust'-Polui, Ngarka-Yedetayakha 1 and 2, the Ekven cemetery, Naukan, and the Paipelghak settlement, and in the museum collections concerning these.

The last presenter to be mentioned here is Kirstine Møller, who delivered a talk on the lesser-known aspects of competing Moravian and Danish ideologies during the colonial period in Greenland and how they influenced traditional Inuit life.

Decolonisation has often been used within archaeology to refer to the practice of accepting indigenous ownership over their cultural heritage and, as a consequence, their right to some degree of control over this heritage and how it is researched (Jackson and Smith, 2005, p. 315). During the conference discussions, the concept of decolonisation was debated, and just as it was agreed that we could never be pre-colonial again, there was a consensus that decolonisation is not possible. It was argued that the so-called “decolonisation” was just a new wave of colonialism as the people involved do not become less colonised by their colonisers, who proclaim this change has taken place on their behalf.

Although people agreed that decolonisation is not possible, it is interesting to note that Arctic and sub-Arctic indigenous people were highly underrepresented at the conference despite the general tendency within archaeology and heritage studies to wish for equal representation. This observation made its way into the concluding debate, which revolved around ideas and suggestions on what to include in the exhibition, how it might be done, and how to avoid pitfalls. Here, more room for indigenous academics and locals to tell the story that is important to them and how they view their past and the exhibition was suggested. The conference's organising team responded by saying that this has been a wish and a plan from the beginning but that the small number of indigenous archaeologists makes it difficult. They are working on a solution, hoping some non-archaeologist presenters like ethnographers and ecologists at the conference might have local connections that could help provide these perspectives for the exhibition.

The discussion continued on the need to avoid misrepresentation of indigenous views. We have all heard stories of terribly long and cold polar nights with limited resources – of the horror-story-like tales of expedition teams like the Franklin expedition and the Denmark expedition to Greenland's northeast coast and the death of the crew members. It was suggested that the exhibition's focus should instead be on the self-determination of the people of the Arctic as they chose to settle there and on the security that follows from living in such a resource-rich area. The importance of balance between presenting the Arctic people as resilient and stressing the current situation's seriousness and the big changes it brings to the ways of life and loss of heritage was argued for.

One form of misrepresentation that could have played a bigger role is the distorted way in which the Arctic is presented when it comes to contact with the surrounding world. During the conference, three types of interaction between the Arctic cultures and the rest of the world were generally used: explorations, such as expeditions and Viking raids; colonialism; and when the locals are subject to research projects. This is an interesting and strange tendency as it has been “modern” to see everything as interconnected since the introduction of the actor–network theory (Latour, 2005), the entanglement theory (Hodder, 2018), and similar concepts. What does it say about us that there is this tendency to isolate the indigenous Arctic despite the presence of waves of migrations as presented by Victor Moreno-Mayar using ancient genomics and despite many being minority groups today in the areas they inhabit? Do we cause this misrepresentation to stay alive? 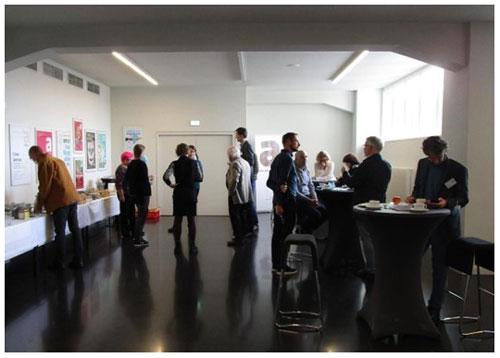 Figure 1The hybrid format of the conference resulted in only a small group of people attending in person. This meant that there was good opportunity to talk to everyone present and enjoy the conference in a friendly atmosphere (photo by Sara Ingrid Brenøe). 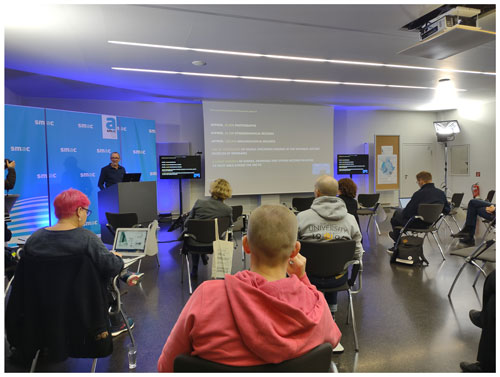 Figure 2The hybrid format resulted in only a small group of people participating at the conference in person. During the presentations this meant we could fit into a small room and it was possible for everyone to participate actively if they wished to. This, however, resulted in an imbalance in representation as online participants did not have the same degree of opportunity to take part in the discussions (photo by Sara Ingrid Brenøe).

Having gone through a long period of forced online conferences due to Covid-19, it was an interesting experience to witness a hybrid event. I participated physically at the conference and did not, therefore, try the online experience (see Figs. 1 and 2). From that perspective, the conference ran smoothly with few technical problems meaning that the online participants could both do their presentations, ask questions, and add to the debate. This format allowed a broader range of people to attend as they were less dependent on travel regulations, and the expenses and time used on travel were minimised. The small group of people attending the physical conference made it easy to get to know each other, and although a sense of hierarchy persisted, it was natural to talk with everyone. For a student who has only ever experienced online conferences, this was a pleasant first-time on-site experience. The less positive side is the unequal networking possibilities for the people online compared to those on site. And although the participants online were able to ask questions and be part of discussions, there was a shift towards those present on site taking a more active share, creating an imbalance in representation. This imbalance is, of course, smaller than if the online participants had not been able to participate at all, so although there are some downsides to the hybrid model, it presents a good compromise – that is, if the online participants have a proper internet connection.

Overall, the conference's organising team succeeded in bringing people together across great distances, and together they assembled an outline of the broad topic of Arctic culture and heritage from an archaeological perspective and of the threat of a changing climate.

No data sets were used in this article.

The author has declared that there are no competing interests.

I would like to thank the smac (Staatliches Museum für Archäeologie in Chemnitz) and the Eurasia Department of the DAI (Deutsches Archäologiches Institute), in particular Christina Michel and Ilia Heit, for the opportunity to attend and contribute to the conference as an early-career researcher.

My participation was made possible with the support of the Polar Archaeology Network (PAN) and the travel funding from the Timeless Arctic Project (Frigga Kruse, Kiel University).

This paper was edited by Bernhard Diekmann and reviewed by one anonymous referee.